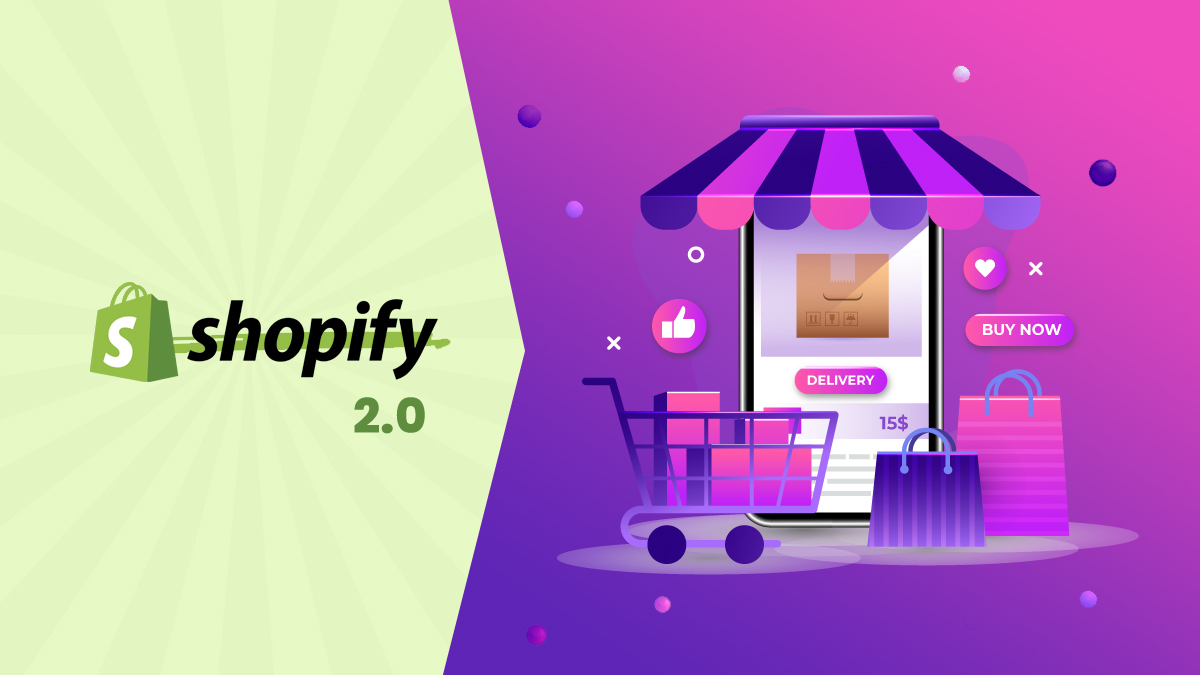 For developing any online store, the first platform you think of is ‘Shopify. The leading E-commerce platform store manages commerce for more than 1.7 billion businesses globally. As a fact more than 450 million people checked on Shopify, in 2020 which means the company is rapidly growing.

On 29th June 2021, Shopify announced its new update – Version 2.0. Shopify 2.0 offers good opportunities for new developers to build themes and applications for Shopify merchants. The new set of developer tools will create an immersive experience in building an E-com website. Additionally, with added control over the store, you’ll gain more control over the products on the website.

Shopify 2.0 feature is an upgrade to the pre-existing Shopify features. From creating customized collections of items to adding actions, you’ll be able to optimize each feature according to your website or app requirement.

A word from the Shopify development services states that the revamped online store will make it easy for developers to add integrated tools and features to storefronts.

For example, Netflix received early access to the version, and they created a Netflix shop, which is the first E-com store for Netflix. Shopify has updated three main areas of its online store in the version – store content, themes & online editor, and developer tools. You need to get well-versed with new features of Shopify 2.0 that will give Shopify for business a new dimension.

With the update of Shopify 2.0, your store will become modern and fully customized. You can add or rearrange the web sections. With no code feature, the merchants will have the creative flexibility to design different storefronts quickly.

The max code feature for developers will give them the freedom to extend. The new feature of the version ensures that the merchant’s business thrives on Shopify, irrespective of technical expertise, complexity, the scale of business, or the size. In addition, it will allow the retailers to highlight their items more effectively by providing detailed product information.

The update opens a door for more customized themes providing flexible customization options for the developers. There will be new opportunities to build new themes and integrations with other platforms. In addition, you’ll be able to host and manage the assets supporting the theme.

The developers added different codes in the previous version for information on the site. It was a tedious task to add information about products, customer orders. Now, with the 2.0 update, you’ll be able to modify meta fields from the dashboard without using the codes.

The meta fields have been revamped in three ways – flexible, standard, and presentation. In addition, the feature allows you to add added information about your products.

For example, on the product page, mention the care instructions for the buyers. The storefront will now allow you to store data about products, customers, and orders in your Shopify account. With the product page information, you’ll be able to attract potential customers, which will increase your sales. The feature also improves the checkout experience on the E-store.

You won’t have to drill down to different sections as the editor will display a tree view of the content you need. From the sidebar, merchants can hide the blocks except for the footer and header. The changes will allow the merchants to update the page hierarchy.

The most significant update to the theme editor is the – Liquid Input setting. It lets the merchants add custom liquid code to different pages directly from the editor section. The Liquid Setting is akin to the HTML setting as it allows access to liquid variables. The merchants can access global and template-specific liquid objects.

You don’t have to change the code theme while adding new codes. These updated changes help merchants to easily work with new updates and make informed decisions about the store.

Shopify 2.0 update has introduced a completely new set of tools for developers to build the store or app. The new suite of developer tools seamlessly integrates with Shopify that helps to develop, deploy, and test different themes. With the Shopify GitHub integration, CLI tool, and theme check; you will experience robust theme development with version control features.

Shopify CLI accelerates theme development so you can test changes, preview, and develop safely. You can run a theme check on your theme using the feature.

Most E-stores are following the trend of buy now-pay later. It allows new buyers to pay less upfront, which increases the conversion rates of the website. Shop pay installment feature in the new update that allows the customers to buy now and pay later. Customers can split their bills into four different installments.

Different E-stores and apps have different needs. Shopify 2.0 app store will provide personalized app recommendations that other merchants or stores use for the apps. This feature saves time and helps you find the best matching app for your store.

The feature comes with the Dawn option, which is 35% faster than the current version in the Shopify app. The updated theme and version will make all the difference in the loading of products on the app.

In the new version, Shopify has announced the developer’s first business model. It includes both the – Shopify App store and Shopify Theme store. As per the announcement, Shopify’s commission for the first one million in yearly revenue will be zero percent. Shopify’s revenue, after which will be 15% after one million in sales. The earlier sales revenue was 20%.

With this new update, the developers will be motivated to create more applications and themes. The revenue-sharing proportion is also a good feature for all the new developers working on startup E-stores. It may also seek to avoid the application issues which are common in mobile.

The checkout feature in version 2.0 will provide a smooth experience for the stores, enhancing their ability to handle thousands of transactions per minute. Developers can integrate with Shopify apps inside the checkout with the help of checkout extensions. The checkout customization feature will function with the Shopify giving retailers a brand interface with faster methods to pay online.

It will allow the store owners to provide better payment options to shoppers. Shoppers can have a localized shopping experience, and websites can increase conversation rates. With an improvised checkout feature, more customers will be attracted to the website as no customer likes to wait at checkout.

The content management system got an update in the version. With the new update, you can get customized typing and publishing features. By the end of the year, all the themes on Shopify will have to use the new version.

Though merchant’s themes will work beyond this year. But to access new developer tools and features, the merchant will have to make sure the theme is compatible.

With Shopify 2.0, the developers have opportunities to use their creativity on the platform. It will provide the merchants the much-needed freedom and control to develop a platform they need. With the new 2.0 version, E-stores can develop, organize, supervise and scale their business.

Shopify has improved its documentation and command-line interface, and it helps developers console for performance testing. Developers can now focus on designing and styling the store to make the brand unique.

To keep your store up to date with Shopify 2.0, talk to our Shopify experts! Let’s talk!