The Answer To The Question: What Came First – POC or MVP? 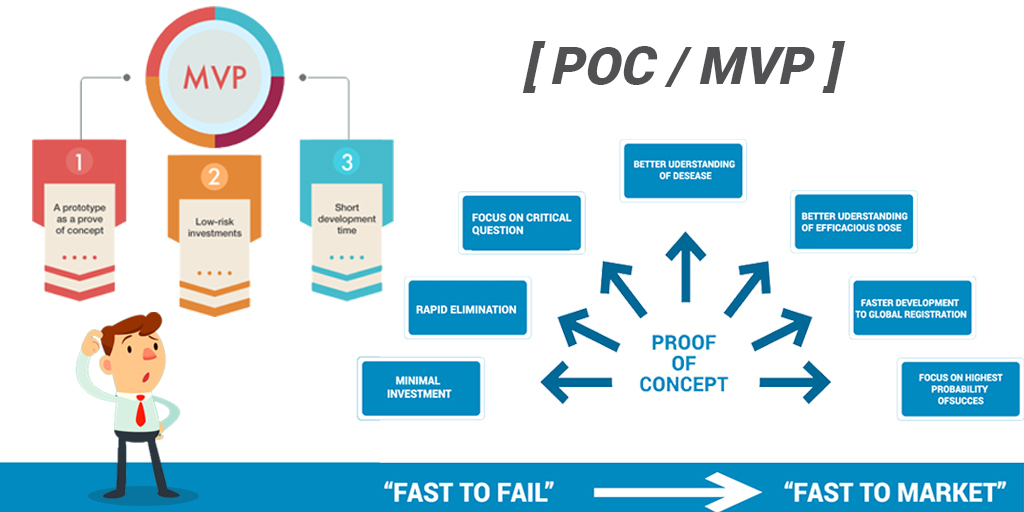 The business is all about manufacturing the product and selling it to the consumer. Well, not really. If we were the representatives of the Stone Age, barter would have been a better alternative to business, but a 21st-century business model; regardless of the sector or industry, isn’t that simple. The reason is that an average consumer is well-informed and responds adequately to his or her needs.

So, is business is all about marketing and packaging? Well, not really. What would you sell if the product itself is missing? Hence, product development is one of the critical aspects of building a successful business. However, developing a product that becomes profitable isn’t easy nor economical. Therefore, the global businesses apply a few concepts to determine the technical as well as the commercial feasibility of the product. The two most prevalent determinants are Proof of Concept and Minimum Viable Product.

Often people get confused about these concepts and their usability. Besides, the million dollar question is which should come first. So, let us answer adequately and put this confusion to rest once and for all.

Proof of concept (POC) is often considered as time taking concept by the stakeholders. Since POC has no inclusion in the final product. However, the more experienced truth says that Proof of Concept holds more importance in framing the idea of any product development.

Before any business takes a kickstart to develop any product, the company needs to fetch its importance in the real world. As before working on the final product, it is important to look out the customers for it and what are their requirements. Therefore, POC is a mere demonstration or documentation which verifies whether an idea or concept has the potential when it comes to the real-world application.

For example, the campaigns and surveys that are conducted before working on an idea. Through these, you get to know how interested the audiences are in the concept. If you are unable to fetch required audiences, you surely know that the idea isn’t going to work well.

While the POC deals with the development of the idea, the MVP is all about developing a product with sufficient features and evaluating the impact based on market feedback to ascertain if a full-featured product should hit the market or not.

A Minimum Viable Product is the one that has enough features to attract and satisfy consumer needs initially. While the final development of the product bases itself on how the product impacts the market and consumers.

Being convinced about the idea of the product is not enough. Usually, companies aren’t sure about having a right product with good enough features for the right set of consumers at the value-for-money price. To determine these elements, the company applies MVP, which is basically a product development process that implements the Proof of Concept.

The product development and marketing process suggest that in a fully developed product, over 60% features remain unused, which increases the cost of the product and reduces profit margin. It is, therefore, MVP is utilized to initiate the product learning process. Hence MVP offers the greatest route to companies to develop a credible, acceptable and successful business at the quick pace effortlessly.

Theories are proven to be inadequate to understand the real-life problem. Therefore, we will look into a couple of pieces development scenario to understand the need of both, the POC and MVP. Since we are living in a technologically changing, digitized world, let’s understand both the concept from Software Development point of view.

Let’s assume that the company would like to develop a mobile application with an aim to reduce the number of accidents during the infrastructure development to avoid paying huge compensation. The idea appears to be fascinating, be it whether it is a viable option or not can only be determined by the Proof of Concept. A documentation will be prepared to evaluate the potential of the app. A company may opt to develop the app itself. However, it does not deliver outcome but stops short at merely understanding the best way to reduce the accidents. Possibly, the idea of developing an app may not succeed.

In a second scenario, let’s assume that an e-commerce giant comes up with an idea of selling, groceries along with electronics, gadgets, and fashion. However, they introduce only electronics and fashion in the initial app to understand if the consumers accept the app for the shopping. If consumer feedback is positive about the mobile app, the company may introduce online grocery shopping feature at the later stage.

To conclude, we would let you know in brief that Proof of Concept offers you to face reality:

However, with Minimum Viable Product, MVP assures you:

• People need your product, and they will be interested enough to buy it

So, it becomes very crisp and clear with the above points that without the POC it is impossible for a company to give a shape to their product. POC does not get noticed by the customers, whereas MVP comes into notice in the form of production. Both POC and MVP holds equal importance in the case of building a product, however, the answer to the question “Which came first, POC or MVP?”, POC it is!