From WordPress to Gatsby: Refactoring the Old Codebase 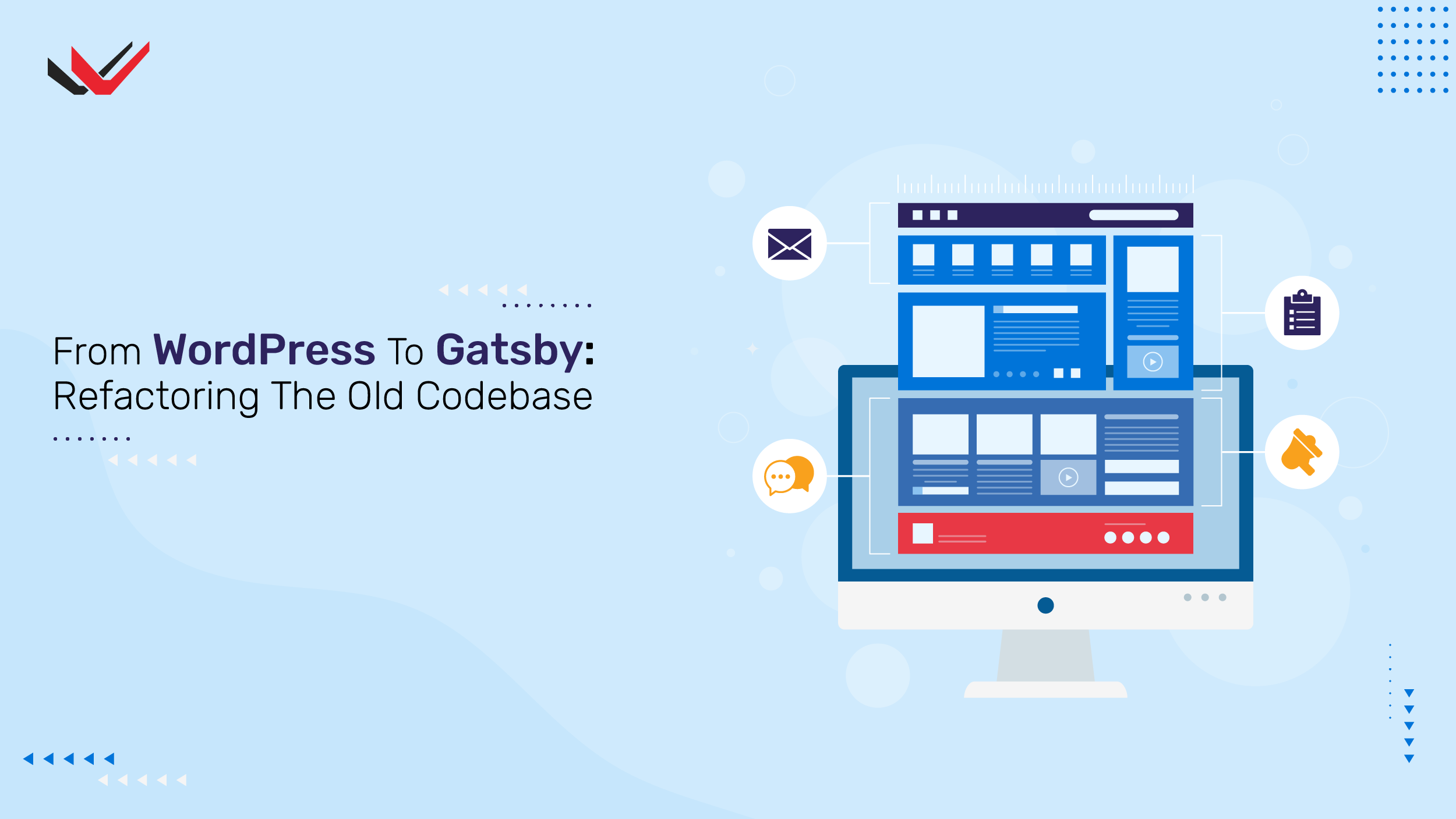 WordPress is simple to set up and use without any optimizations, but it is quite slow. Such page load speeds on our WordPress website may have an impact on traffic. Adding plugins, using server-side caching, minifying files, and delivering front-end files through a CDN can help speed up WordPress. However, it is intrinsically slower than static site generators. Because of its various use cases, WordPress is based on PHP and includes a lot of legacy code. This is frequently associated with poor performance and difficult optimizations.

Changing a WordPress site to a new host may seem challenging, but more and more blogs are abandoning what was once the most popular content management system on the internet. The number of options is growing as technology advances, and WordPress has had its fair share of competitors in recent years, the most promising of which is Gatsby.

Despite the fact that they work in a similar way, many website owners choose Gatsby to WordPress for a variety of reasons. This article analyzes both WordPress and Gatsby, from functionality to performance to accessibility.

WordPress has been the most popular content management system for decades. WordPress has continued to provide great service for hundreds of blogs and websites as an open-source model over the years, In addition, it offers a variety of free content and SEO management tools, such as plugins and extensions.

According to Statista, it is currently used by 66 million websites, including high-profile users such as TechCrunch and CNN. Every month, WordPress websites generate more than 4 billion page views from 368 million users.

WordPress was primarily used to create blogs rather than more traditional websites. However, this hasn’t been the case for quite some time. Thanks to improvements in the code base and WordPress’ vast ecosystem of plugins and themes, you can now construct any type of website with WordPress.

But then again, the disadvantages of adopting WordPress are well-known to developers. For starters, the system is PHP-based and has a large amount of legacy code, making optimization more difficult. WordPress provides a simple site to configure but not a rapid site, and as you may know, the slower a site is, the fewer visitors it attracts. Not only that, but a website’s loading speed is one of Google’s most important ranking factors, aside from excellent content.

Even though WordPress spent some time updating its content editor, it still fell short. The new content manager (Gutenberg) divides content into blocks, which many users found difficult to navigate, resulting in a less-than-ideal user experience. I don’t know, I think it’s great once you get used to it. The majority of users install the old editor plugin to stick with what they’re used to.

PHP is required to make changes to a WordPress site. Although WordPress allows for custom adjustments, many users find them to be too time-consuming and demanding. And, aside from WordPress sites, PHP isn’t the most used language, so working with it feels a little pointless.

Some users prefer page builders, which allow them to easily change and adjust a site’s look without having to know how to code. However, you can’t have all of the features in the world with WordPress, nor can you construct a dream site with all of the features you want. Using WordPress as the front end for a more complicated site will most likely be difficult.

Because of its extensive feature set and the numerous plugins available, WordPress may include a large number of unwanted third-party plugins that cause your website to load slowly. Furthermore, while non-technical users can simply add plugins, it’s worth mentioning that each plugin slows down the loading time even further. Furthermore, multiple plugins can frequently conflict with one another, causing your website’s speed to suffer.

WordPress builds dynamic webpages that require the server to run PHP, MySQL, and Apache or Nginx. By generating a list of HTML pages for all the material on your site, you can construct a static version of WordPress.

Headless WordPress, often known as serverless WordPress, is a static version of WordPress. This conversion is performed only once, allowing the same page to be served to visitors many times.

But how can you make a static version of your WordPress site?

And this is where Gatsby comes in handy.

Because GatsbyJS emerged as one of the best alternatives. The majority of site builders and users turn to languages like JavaScript and React.js, which is exactly what Gatsby offers. It is a static site generator created mostly in React, unlike WordPress, which is open-source.

Gatsby, or GatsbyJS, is a ReactJS-based static site generator that uses GraphQL. Anyone can use Gatsby to create feature-rich, entertaining websites and apps. Gatsby uses GraphQL to get data for your site from a variety of places, including existing websites, API calls, and flat files, and then produces a static site based on your configuration settings.

Gatsby gradually caught the interest of not only JavaScript developers but also WordPress developers and users. Many WordPress users find its capabilities interesting, such as ultra-fast image handling and increased hacker security, but would prefer to use them while continuing to manage content using the WordPress admin and editor.

The platform does not render pages when users visit a Gatsby-based site. GatsbyJS, on the other hand, produces pages during compilation and then publishes them all online. The solution doesn’t require servers or their upkeep, and it works with static files like JS, HTML, and CSS. Finally, Gatsby does not use PHP in any way, which is a huge relief for WordPress users.

Gatsby has been well-received in a multitude of contexts. What’s more, Gatsby powers the home page of Airbnb’s Data Science and Engineering Blog, but the actual blog content is housed on Medium.

Gatsby- Benefits to look forward to

Additionally, the code of the site is compressed, compiled, and evenly distributed. Static assets created by Gatsby are easily placed anywhere, as they are generated in the background at build time, server-side! The articles are formatted in Markdown.

From WordPress to GATSBY

The most critical factor to consider when migrating your complete content from WordPress to Gatsby is not to lose your present SEO value.

Fortunately, Gatsby enables receiving content from other sites rather simply.

A source plugin is the first thing you’ll need to transfer your material. A source plugin will help Gatsby populate its GraphQL store in a seamless and automatic manner, while also giving you access to all input data. The source plugin can be customized to meet your specific requirements, and you can even make your platform open-source rather than static.

GraphQL is a sophisticated approach for obtaining API data, and it differs dramatically from its predecessor, the REST API. GraphQL is a feature of the Gatsby platform that may be used as a standalone application. It is possible to bypass GraphQL entirely, however, this should be avoided as a possibility because it would prevent you from using a number of critical features.

Better Performance: The Gatsby framework has optimized code-splitting, optimized images, and partial loading out-of-the-box functionalities that help with website performance. Furthermore, Gatsby just loads the most important bits of the website. It prefectures resources from other sites, making it easier to navigate your website.

Faster Internet sites: The main advantage of using Gatsby to create a static site is speed, which webmasters have been attempting to improve since Google announced that site speed would be factored into online search rankings. Page views and conversions are also affected by load times. According to estimates, a one-second delay in site load time might result in a drop in conversions.

Security: With a static site, you also receive additional security. There isn’t much to hack into because it’s just a bunch of static files being provided. Additionally, if the static files are lost, you can always regenerate them.

Server Costs: If you’re hosting a dynamic site, you’ll need a server that works with your technological stack. When dealing with a static site, you can host it on nearly any server, which reduces the cost of hosting as well.

Several Source Data options: Gatsby provides the capability to import data from anywhere, which means that you have multiple data source plugins to grab data from APIs and databases. This allows deploying various integrations for marketing and development easier and faster.

JavaScript is required to generate the static site using Gatsby on every modification, which can be done on a local machine before transferring the static files to the site.

One of the key reasons for WordPress’s widespread adoption is the ease with which you can create, run, and edit a website. The CMS tool has been used to build websites for major brands, and it’s performed flawlessly with excellent Lighthouse performance scores. However, the majority are poorly produced and maintained personal blogs/projects and/or small enterprises.

HTML, CSS, JavaScript, ES6, Node.js development environment, React, and GraphQL are some of the most important prerequisites for setting up a Gatsby site. Setting up a Gatsby blog can be difficult if you’re unfamiliar with all of these tools. The Gatsby Getting Started Tutorial, on the other hand, is a comprehensive step-by-step instruction that covers most of these issues and is ideal for intermediate developers.

Which one do you prefer: Gatsby or WordPress?

Everything comes down to the exchange these solutions provide, which is determined by your project requirements, technical expertise, available project, and the price you are ready to pay.

But if you have already decided to migrate your website to Gatsby which offers a faster loading time, our experts at Webuters will assist you in making the transition successfully.