Functional vs Class Components in React 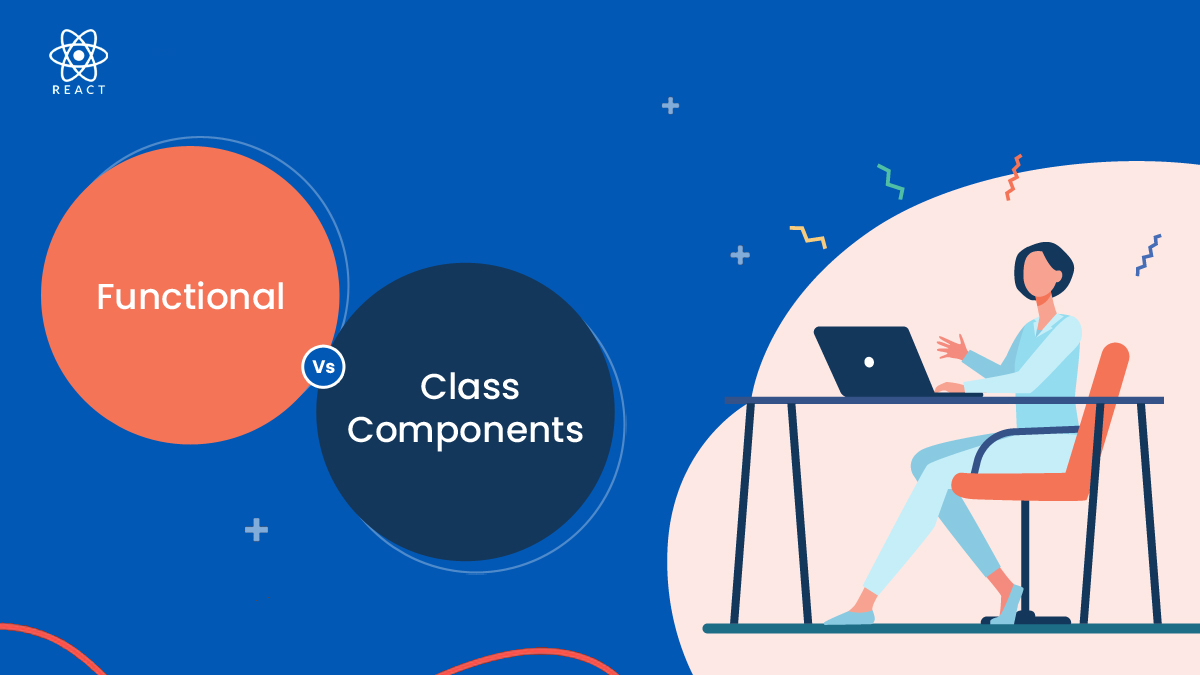 To fully comprehend this difference, you need to gather your understanding as to when to bring in either of the components. But before delving into the core aspects of React, let us first know what is React.

React: The definition and use case

React is a library of JavaScript which is used for developing optimized and interactive user interfaces (UI) for your mobile and web-based applications. The creator of React, Jordan Walke, was a software engineer at Facebook.

In a Model View Controller (MVC) based design, the view layer determines the application’s overall appearance and feel.

What is JSX (JavaScript Syntax Extension)

JSX – is one of the features of React and is used for defining the UI.  It makes debugging and understanding of code simpler by writing structures of HTML in the same code that contains JavaScript.  This ensures that complex DOM structures of JavaScript are brought into implementation.

How JSX Is Inseparable Component of React

The first output that is generated after the successful installation of an initial project in React is HTML code. This code is obtained through a JavaScript function that fetches this code from it.

Ideally, frontend-based projects keep codes of JavaScript, CSS, and HTML codes in distinct files. This is not the case in React since the working is different in case of it.

This is because JSX lets you write codes in both JavaScript and HTML together in a single file though you have the option of writing CSS code into another file.

JSX is very flexible since you get to run any JavaScript program such as (logic, routines, variables, and so on) inside the HTML code through curly braces.

Components in React are self-regulating, reusable block of code which splits the UI into bits. Instead of developing the entire UI in a single file, you can split the divide all the units into independent pieces.

In other words, when you develop a  web application  using React, it is created in the form of numerous small and separate snippets of code which are known as React components. There are basically two kinds of components –

Functional Vs. Class Component in React

Before outlining the differences between the two, let us find out how the two components functioned before the launch of Hook. Earlier, functional components were used to render JSX for displaying content to the user.

In the case of class components, the rendering was done by utilizing the state system or the lifecycle method system.  Let us find how the two components are different from each other-

JSX is an abbreviation for JavaScript XML. It lets you code HTML elements in JavaScript and put them in the DOM without utilizing appendChild() and createElement() functions. DOM (document object model) is a software design interface for HTML and XML documents.

It denotes the page on which the programs perform modifications such as document content, structure, and style.  The document representation by DOM is done in the form of objects and nodes. The DOM represents an object-oriented version of the web page, which can be altered using a scripting language, e.g., JavaScript.

Rendering JSX in a class component

The rendering of functions or methods is done through ES6 classes. These are special classes that are used for formalizing the general JavaScript pattern of acting like class inheritance hierarchies using methods and examples. There is another way of achieving the same output through destructuring.

Let us list out few key points of functional components-

Functional components are also known as stateless components, which are JavaScript functions that return JSX.

Let us list out few key points of functional components-

Why do Functional Components win Over Class Component?

If you are coding for a presentational component that does not have a state of its own or requires accessing a lifecycle hook? Then you should definitely use more and more functional components.  However, for handling states, you can utilize the class component.

React Functional Components are the de facto tool if you want to write the latest modern React applications. There have been a lot of different kinds of components available earlier. However, with the launch of React Hooks, it is possible for you to program your whole application with just methods in the form of React components.

Our React experts can code your ideas into a market-ready product, need an expert hand, get in touch!