Mobile App Development – The Journey From Idea to App

Smartphones has brought a revolution in the business world. From ordering food to booking movie tickets,  mobile apps are available for e

Mobile App Development – The Journey From Idea to App

Smartphones has brought a revolution in the business world. From ordering food to booking movie tickets,  mobile apps are available for everything, you name it and you will find an app for it. This growing popularity of mobile apps has made it a necessity for businesses of all sizes. It won’t be wrong to say that app has become a tool to reap the desired business growth and revenue.

Running an app on a smartphone may sound like a great idea but the story of how it is developed is equally interesting. The journey from idea to app comprises of multiple stages that we will discuss here. To make it easy for you to understand we have discussed each stage that will result in building quality apps . 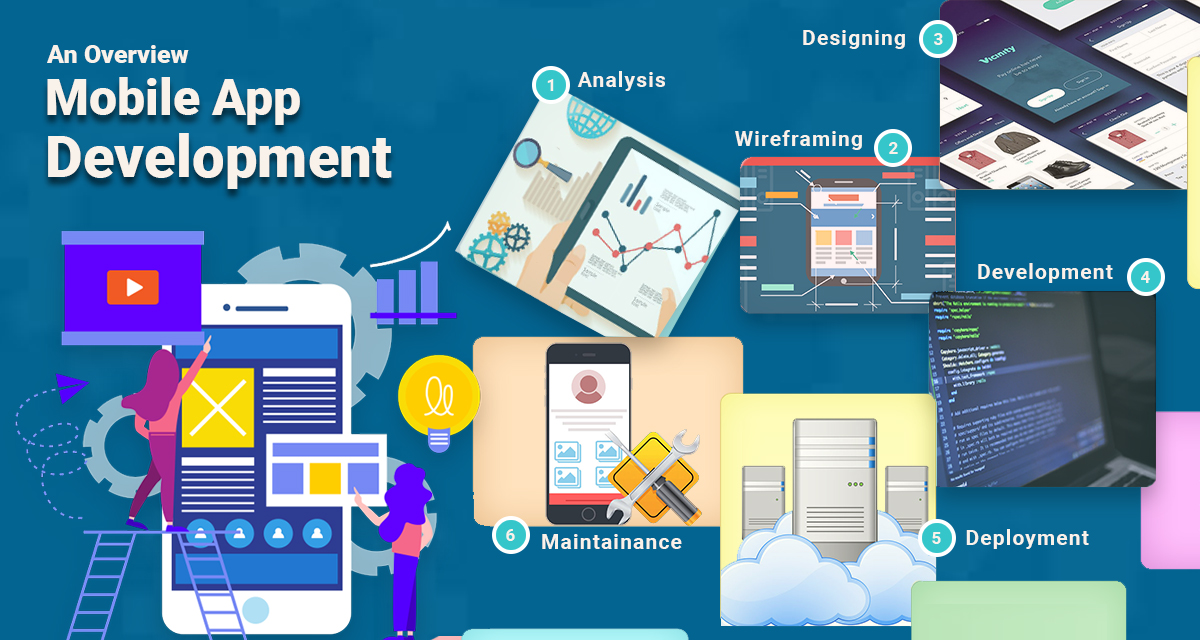 Each smartphone platform involves thousands of applications. As a developer, you will need to invest time, money and effort to build an app through various stages. You will need to follow a road-map with certain fixed rules. From generating an app idea to making it a reality, the path will be more or less the same for you as it is for other developers.

Creating an app is not as simple as it appears on pen and paper. One needs to identify and connect the hidden dots to accomplish the task with finesse. Here is a list of the six vital stages that sum up the story of the development of an application.

Everything has a beginning, and it all begins with an idea. The creation of mobile applications is not an exception to this rule. Your objective behind building an application should be to make it popular on a platform. This is easier said than done as there are thousands of applications and an equal number of developers. Moreover, there are apps for each category.

You need to think like a developer: be creative to sell your idea via applications. Every app is an idea in itself. As such, there is an intense competition, which developers face to grab the attention of users towards their app. Your idea should help you race ahead of others in the marathon of app development.

Though you are supposed to play by your own rules, you must evaluate the rationale behind developing an application. Plus, you need to figure out how you would pitch for it. The bottom line is that you should create an application, which should not end up in a waste bin.

Do you already know have an app idea? Do you know why people will need this app? Does your idea is to solve a purpose? If you have all three answers then the next thing to do is to do a competition analysis. You must test the waters before entering the competition.

Define Your Pixels Right to Bring Your App to Screen

Now you have a validated idea, you know who your competitors are and why your idea is better than the existing. Now the big task is to convert the idea into pixels on your screen. We are talking about app design, UX/UI are critical phase of app development. UI is the visual and UX deals with human interaction with the app in planning. Generally, UI/UX designers need to do a lot of careful deliberation relating to design and features to sail through this initial stage. Not to mention, design elements are of value. If your app has the best features with poor pixels, it might fail.

Remember that a user can read your app by merely glancing over its design. So, try to come up with an idea, which would make the first impression a lasting one in the minds of users. Put your head and heart together to bring out a design featuring the best theme, buttons and navigation.

Be creative with the user interface of your app: consider both common and unique design patterns if required. You can always revise your design, and keep doing it until you achieve your desired result with app screens. Also, you can get valuable insights into app designing ideas by spending time studying successful apps.

Regardless of whichever approach you choose, give it your best shot with your fingers crossed. Do not lose your heart at the first attempt. You will have more chances to succeed if you persist with your efforts.

The phase of developing an app begins with the generation of its idea. However, the actual process begins after putting the finishing touch to an app idea. Once you have the definitive version of how your app should look like, you will need to focus on the core app development phase.

For the sake of your convenience, it is strongly advised that you prepare a two-point checklist: one involving the fundamental functionalities, and the other involving the key features. Wondering which task should be accomplished first? It is simple and easy: the latter should follow the former.

The stage where extensive use of coding for your app is required, it would be a better idea to break it up into small sprints. This smart and innovative move can benefit you in several ways. For one, it would enable you to code your app with ease and build it according to a plan. Additionally, you can keep making changes to it now and then to enhance its quality and usefulness for the users. Making improvements to your app will necessitate time as well as effort on your part. With flexible planning in mind, you would not only have the likelihood of developing a top-notch app but also launch it at an earlier date.

Kill the Bugs with Testing/QA of App

How many times have you used an app on your smartphone and cursed its developer for technical bugs or issues? Mobile platforms thrive on user experience, and they rate the apps based on their experience. If an app gets into their bad books due to technical bugs, they can use this feature to post negative reviews and give a hard time to an app developer.

Chances are you may want to evade such a situation at any cost. Your best bet to do it is to test your application before going live with it on Android, iOS or any other platform. Test your app for every possible aspects that can crash user experience: its interface, compatibility, security, usefulness every features is to be tested. Whether you find it interesting or tiring to test your app but test you app at every phase of development, quality analysis is another important part. App testing and QA should be taken care of before the app launch, or else you will end up making hole for negative user reviews.

An interesting spin-off of testing an app is that you can launch it with confidence and assurance that it will do well without any hiccups. Moreover, you will deliver a bug free app and a positive user experience.

Let the World Know About Your Idea – Launch the App

You have done the major part of the hard work; you have spawned an idea relating to an app, and have brought it to life. Now is time to show others what you have accomplished. Yes, you have read it right. This is what you would do while launching your application. All you need to do now is give a finishing touch to the app to ensure it becomes a success.

Look at it with a critical eye; launch the app for a limited audience to know the user experience. If all comes green, you are good to reach bigger audience. By adopting this approach, you will come to know how your app will stand in the crowd of other applications in the market.

After eliminating all the factors that might prove hurdle for your app, you are ready to launch your app on the app store.

Alongside an SMO campaign, you must also run an SEO campaign with targeted keywords to popularize your newly-launched app. Highlight the features that are fresh and the way they benefit users. Encourage users to try your app for all good reasons.

Focusing on updating your app from time to time and adding new features to it will pay dividends in the long run. Keep a check on user reviews, work on user suggestions and complains, and keep updating the latest versions to the app store. Plan your next app accordingly.

Generating an idea and working on it is a serious business. It takes a solid planning and careful deliberation to translate it into reality. Systematic planning, coupled with right strategy makes app development an overwhelming process. Don’t have an app for your business? Let Webuters help you have one!