MongoDB and CouchDB have a lot in common, but are not the same.. If you are a programmer and confused […]

MongoDB and CouchDB have a lot in common, but are not the same..

If you are a programmer and confused between MongoDB and CouchDB? Then you must know that both are document databases that follow replication protocol and also a preference of developers who wants to choose “NoSQL” databases. Although they have many similarities but they are different in some ways. In this article I will be discussing all the differences which might clear your confusion.

Let’s start with an overview of NoSQL databases and an introduction to MongoDB and CouchDB followed by the key differences between the two. Let’s begin…

What are NoSQL databases?

NOSQL databases or “not only SQL” databases are non-relational databases which do not store data in tabular form like MySQL, Oracle, PostgreSQL etc. NOSQL databases are known to be “not only SQL” because it does not require SQL queries to perform CRUD (Create, Read, Update, Delete) operations. They store data differently and come in a variety of types based on their data model.  When compared with relational databases NoSQL databases stores unstructured or semi-structured data so you don’t need to make schemas and can store your data directly in JSON format.

MongoDB is a NoSQL database which is an open-source project and written in C++ language. It stores unstructured or semi-structured data which means it does not create schemas like relational databases. It is a document database that stores data in form of collection and each collection is a collection of “documents”. Like in relational databases you have tables here in MongoDB it has collection and in each collection it contains related information in form of key-value pair which we call documents. You can refer to the diagram shown below. 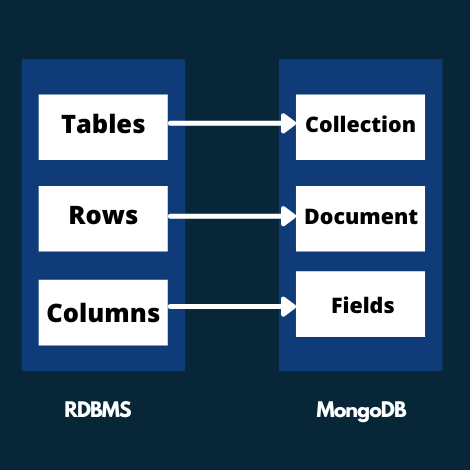 MongoDB is very popular in developer community because it can be used easily with programming languages like JavaScript, Ruby and Python. Other reason can be its speed; it is faster in showing query results than relational databases.

Couch is an acronym of “Cluster of Unreliable Community Hardware” that is because it allows a cluster of unreliable hardware (servers or nodes) to work together and if any of them crashes then the remaining nodes will still have the data. CouchDB was introduced in 2005 and after few years it became part of Apache Software Foundation. As an open source project it is supported by an active developer community and it is popular because of its replication protocol, conflict detection etc. I will discuss some of them for sure.

Like MongoDB, CouchDB is also a document database and stores data in JSON-based format. Unlike relational databases, it is a schema-less data model so it is easy to extend, alter or delete the data fields. CouchDB stores documents and each document is uniquely undentified in the database.

No, let’s get an overview of its features.

Now, you have a clear idea of both of them so have a look at their differences too.

Difference between MongoDB and CouchDB

I know you might be confused between the two as both of them have lots of similarities but they are not the same. Let’s understand the CAP theorem first then will move on to how these two are different.

According to most experts a database cannot have all 3 abilities no matter if it’s relational or non-relational. MongoDB and CouchDB differs in CAP theorem as CouchDB prefers availability and partition tolerance (AP) while MongoDB prefers consistency and partition (CP) tolerance. The right choice of database depends upon the application type and the current preference of developers. In an analytical application, it is necessary to show the recent data even if the end user has to wait for few minutes so in that case a consistent and partition tolerance database is used. Obviously, MongoDB will be a good choice instead of CouchDB in above example.

Some other differences are listed below: –

Scalability and Performance: MongoDB is a great choice when it comes to work on very large datasets and high performance requirements. If the developers are not sure of the resource utilization in initial stage than they can start with MongoDB and can expand easily in future. Another difference is the performance; CouchDB offers master-master replication while MongoDB offers master-slave replication, it means in CouchDB all the nodes will have read/ write access to dataset and it can create a lot of inconsistency issues.

Popularity: No doubt to say, MongoDB is more popular than CouchDB because Mongodb provides greater performance and scalability. It has a wide developer community which works every day to make it better.

Both MongoDB and CouchDB sound similar but they do have certain differences which cannot be neglected. When it comes to choosing between the two the developers needs to figure out the type of application they are working on because when it comes to showing the recent data as a priority than they should choose MongoDB. When the availability is the main preference than one should choose CouchDB. Obviously, other factors also matter. Both are beneficial over other in different situations, the final choice rests with you. While you make a choice, you should know that MongoDB have a large community of programmers than CouchDB, make your choice based on the need.

Do you think MongoDB is better than DynamoDB?

New Architecture with version 0.68.0 by React Native Team: The Talk of the Town

The Vercel vs Netlify War: Who Wins And What Can You Do?

The serverless ecosystem has grown in the past 10 years. And it continues to expand with industry giants like AWS, […]

How to Increase Your Sales with Custom Website Development Services?

What could be more enjoyable than browsing a website that is effectively optimized and provides a wide range of usage?  […]

Industries that Use Salesforce CRM the Most

OpenAI Launches AI Text Detection Tool, Including for Its Own ChatGPT Model