With the evolution of technology, the complexity of our software system has been increasing day by day and they are driven by multitudes&

With the evolution of technology, the complexity of our software system has been increasing day by day and they are driven by multitudes of availability and scalability requirements. In recent years, the relational database management like PostgreSQL, MySQL or Oracle system took a leadership in the world of changing technology. Among all the databases, MySQL takes the first place, being the most popular database distributed, developed and supported by Oracle Corporation. Being a relational database management system (RDBMS), it stores data in the form of a table which is a dataset structure consisting of columns and rows. In a Database Object (table) we predefined the schema based on our requirements and set up rules that manage the relationship between fields in that table. To access this data SQL language comes handy.

With the increasing variety and volume of data, it became a challenge for the organization to handle it, thus imposing the limits on the scalability of the overall system. Therefore, the companies started looking for a way to build complex distributed systems that would be cheaper and more scalable. This gave rise to MongoDB that replaced the existing relational infrastructure and is being used for new applications.

MongoDB is a NoSQL open source database developed by Mongo DB Inc. It stores data in the form of JSON-like documents. It uses dynamic schema, which means you don’t need to define the structure like fields and the type of values it stores, in order to create records. Since both MongoDB and MySQL store records in a different manner, you might be thinking which one to use and when? We have your answer.

MySQL is an Open Source database with a free commercial license. It can be Setup very easily in Unix, Linux & Windows environment and is usually available on shared hosting. It implements SQL database that is well suited for medium or small web pages. PHP and Java based web applications like Joomla, Dokuwiki etc. use a DB storage backend. However, MySQL is a most common and widely used database, but when it comes to storing and querying on a large amount of data, it’s a bit difficult. MongoDB on other hand stores data in the form of Documents and retrieves it fast. Below is a small comparison between MySQL and MongoDB.

2) As relation data store, MySQL needs a strict schema for its data model. Here all the tables are created with defined columns so that the data can be stored or queried using SQL language whereas there is no restriction of the schema on the stored documents in case of MongoDB. It is only restricted to the supported data types and stores JSON documents of any shape, this speeds the development process.

3) MySQL is perfect to be used for applications that can’t tolerate data inconsistency or data loss as it is a fully transactional relation data store. Whereas MongoDB supports atomic updates on single document level.

MySQL and MongoDB have a lot of similar analogs. We have outlined some of the similar concepts they have: 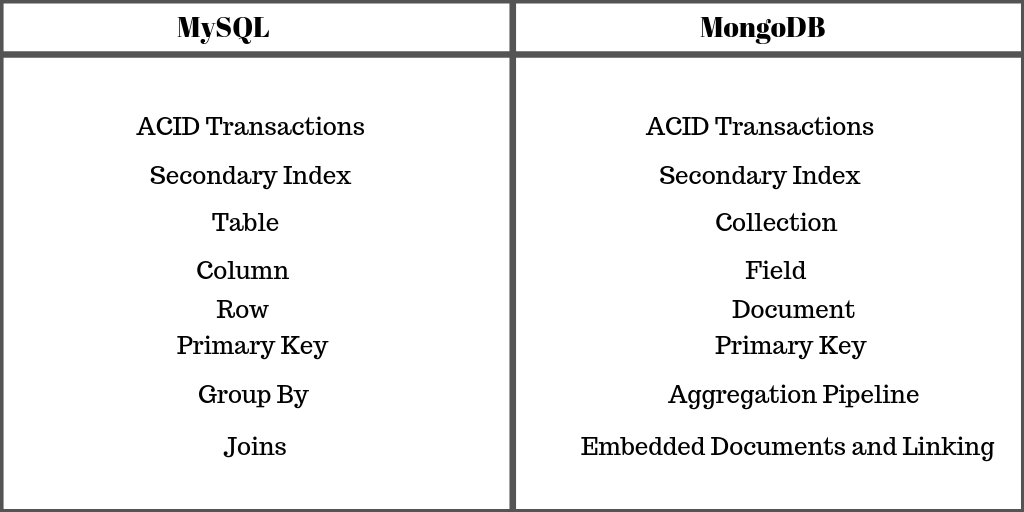 Like MySQL, MongoDB also comes with a lot of functionality and features that are different from those provided in simple key-value stores. Like MySQL, MongoDB also has a query language, and it also has a powerful aggregation framework for data analysis, highly-functional secondary indexes that include geospatial and text search, and more. Unlike relational database, MongoDB allows you to make use of its features and functionality across more different data types.

Why MongoDB is Preferred Over MySQL

Both MySQL and MongoDB have their own positives, but it has seen that over the past few years, MongoDB is being preferred by organizations of all sizes. The reason is its ability to handle diverse data types, quick application development, and efficient management of applications. The other advantage of MongoDB is the removal of complex object relational mapping. The biggest of all reasons to use MongoDB over MySQL is that the latter requires custom engineering work unlike MongoDB that easily scales.

Both MongoDB and MySQL serve in different niches, and have their own benefits and drawbacks. Based on your project goals and other factors you need to decide which one better solves the purpose.

We can’t say one is better than the other because the choice can only be made based on the data requirement.